One of the most remarkable and meaningful personages of world of art, not only in Poland, but also abroad is Jarosław Kukowski. This contemporary artist was born on 11 April 1972 in Tczew.

He presented his works for the first time in 1994 in the ‘CSW Stara Łaźnia’ gallery in Gdańsk. That year he exhibited three more times – in Starogard Gdański, Gdańsk and Skarszewy. In the following years he presented his paintings several times, for example in Warszawa,in the ‘SD’ gallery with which he cooperates up until today, but also in Łódź and Kraków. In 2002 he took part in a collective exhibition called ‘Polish Surrealists' in the Panorama shopping centre in Warszawa. Among the presented works, there were also paintings of Zdzisław Beksiński, Tomasz Sętowski, Jacek Yerka, Karol Bąk, Jacek Lipowczan and Rafał Olbiński . In the same year, Jarosław Kukowski's works were also exhibited in 'ARTEXPO' in New York. From that day he has been also exhibiting in Denmark, Germany and Canada. In 2008 the artist’s paintings were also shown in a series of exhibitions in the United States in Miami, Chicago, Dallas and Los Angeles. Jarosław Kukowski deals with oil painting, but also drawing. The essential feature of his work is a high level of workshop and using a painting effect called ‘trompe l’oeil’ (fr. – optical illusion). This illusionistic painting allows the painter not only to put an incredible reality to objects and people, but also to create depth of image. Three-dimensionality of representation and a precise elaboration of the smallest details allows the viewer to immerse in a different reality, almost touch it. Apart from realistic or hyper-realistic works there are also different, of a more ‘economic’ form. The idea of the paintings is conditional mostly upon content. In his works he raises social and culture topics. "To take a breath and rest" he also takes on slightly lighter issues and paints images seen in his dreams.

A few cycles composes the artistic output of Kukowski. One of these cycles are the ‘Un-dreams’ (‘Nie-sny’). These works are dominated by simplified persons reminding plasticised creatures, sometimes they transform into obscure anthropomorphic monsters or deformed embryos. The form of these creatures repels with its limitedness and perversion, but it also intrigues. Their deformation is a result of an internal and physical pain. ‘Mutated, deformed personages in the ‘Un-dreams’ series do not show the ugliness of human being as it often is interpreted. Although, it cannot be concealed that in the kingdom of animals one can meet more lusty animals than we are. (...) the deformations are the result of suffering.' . It also is, as it was claimed by Bartłomiej Garbaczewski, an act of taunting the cult of body. Disseminated, mostly by the media, canon of beauty – slim women with unnaturally big breasts and silicone lips and muscular men – causes that people want to become such ideals. It is also visible in the proportions of manikins, toys to which we converge to and often ridicule. Kukowski approaches the issue with a lot of irony and wit. In the painting called ‘Waiting for a lover’ (“Czekając na kochanka”) the painter showed a deformed, lying personage of a woman-mermaid. Her massive body bolstered on her elbow with slightly bent legs, spills on the floor under the influence of the weight. Legs, knitted from knees down, transform into a fin. They look like carrot roots which often are associated to women’s hips and thighs. The head in proportion to the rest of her body is very small. The author emphasised woman's physiognomic features maintaining an element of eroticism. The seductive goddess is here a fat, not attractive lady.

Kukowski successfully uses the image of the mermaid also in a different matter. For some time, he has been interested in an expression form called trite. An example of this topic is his work called ‘Little Mermaid – Happy Ending’ ("Mała Syrenka - Szczęśliwe zakończenie"), which comes from the 'Dreams' ("Sny”) cycle. It is an eagle-eye view. The mermaid emerges from the pool. She touches her hair in a passionate way. Her fin is visible under the shallow floe of water. At the bottom, the composition is cut by a masculine hand which passes the woman a drink. 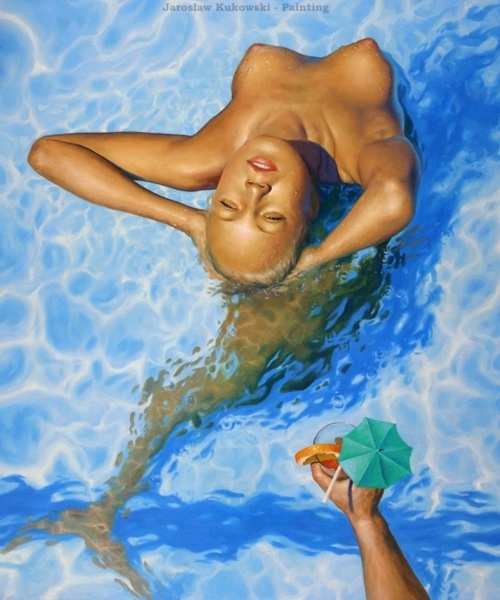 The author with a photographic precision illustrates each detail - drops flowing off the woman's body or refraction of light on the surface of the water. This idealized scene is maintained in a realistic, yet a bit – consciously – redrawn idea. The succulent colours intensify the idyllic character of the view. ‘Exceeding the boarders of a good taste is a really great fun. A lot better than breaking taboo subjects forcefully once again. Sometimes, while redrawing coloration of a work, simplifying it in a painting way one can smuggle particular contents. For example, if treat a Windows XP wallpaper in an over-painted way which was used as a background for an image presenting Russian attack on Georgia, it will not be recognizable. If paint the mermaid emerging from the pool precisely according to the rules of XIX – century academism, the painting will lose its influence strength and a provocative character.'

A different image of a woman’s body is shown in the 'Frescoes’ (“Freski”) cycle. These are much more subtle paintings. Thematically, acts predominate in these paintings and one can also find dead nature, portraits and landscapes. What connects the paintings is the fresco from and the effect of one image emerging from the other one. Kukowski created space suggestion on a two-dimensional surface. This illusionistic method consists in painting a flaking and scrapped paint under which there is another painting. Such works are usually maintained in a warm, greenish hue.

The ‘Fresco nr 47’ (“Fresk nr 47”) illustrates a young woman lying on her side, turned with her back against viewers. The act is put in an undetermined space. The image is disturbed by paint decrements. At the bottom of the picture one can see the hidden layer of the work – dead nature. The ‘Fresco nr 46’ (“Fresk nr 46”) presents an older man, while the bottom layer is covered by a landscape. The sense of these works is linked with passing, shortness of human life and physical beauty. These compositions, by recalling the evanescence of reminiscing, create a melancholic mood.

Jarosław Kukowski deals also with social issues. He takes on topics which are often directly referred to our reality. 'Poland and the people are my inspiration'. In the oil painting called ‘Mantises’ (“Modliszki”) the author presented two sitting persons opposite each other. The table which is between them is covered with a checked white-green oilcloth. A bottle of vodka, a filled vodka glass, a glass and slices of bread are on it. Between the people, on a wall, in a small and shallow recess we find a bas-relief – a piece of Polish emblem. Both persons have a shape of the title mantises. Their bodies and necks are elongated, just like their arms. Deformed hands are almost as long as the arms. Their small heads are looking at each other. Only their stomachs are massive and heavy. Next to one of the persons there is a plane ticket. This work is surely about emigration in our country which is present even now. Its symbolic character is a form of critic directed to national authorities. None of the persons on the painting is happy. They seem to be helpless and have accepted their fate. This is their fare-well meeting on which they make a toast to a better future. 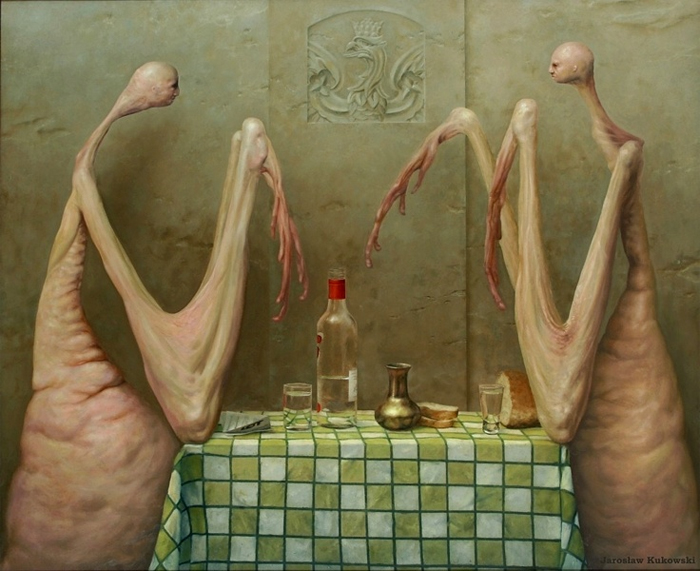 There is a reason that the artistic output of Jarosław Kukowski is connected with surrealism. The aesthetics of this trend is visible in many paintings by Kukowski. The artist often puts unrealistic personages into a realistic scenery or he reverses the situation by putting people in a distant, fantastic landscapes. An example of such solution in which the atmosphere is the most important factor, while the artist’s imagination takes the viewers into a super-realistic world, is the painting from 2009 (without any title). It is a wide landscape visible from the eagle-eye view. It presents a floe of a lake among rocks. The stony deserts stretches up to the horizon. Over one of the tips of the walls there is a floating irregular rock from which water is dripping. At the top of the composition there is a stone shelf with a young person on it. However, what we only see are the legs of this person, her feet and tips of her fingers holding the base of the rock. This virgin unexploited landscape emanates calmness. The atmosphere of the painting makes us want to contemplate, but it also provokes an internal meditation-like silence. We can easily personate the person sitting on the rock, the roof of the super-realistic world. 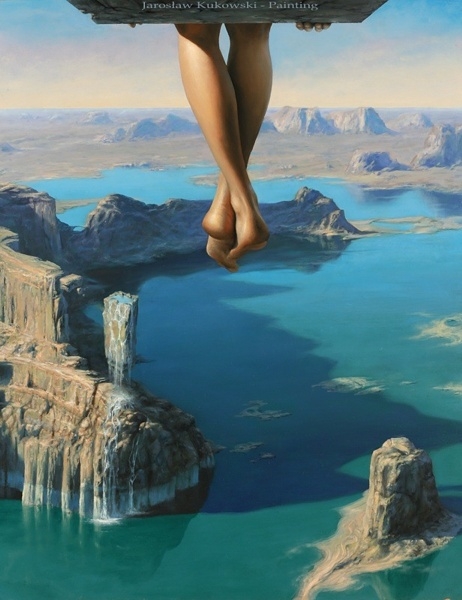 Kukowski’s works connect with surrealistic poems, it can be in particular seen in ‘Dreams’. However, the artist does not think of it as his most important cycle. ‘Paintings from 'Dreams’ have usually a decorative character. Some of them have a certain hidden meaning or a provocative element like, for example, mermaids, but a strong emphasis on form connects them all. After painting an image of a very heavy topic it is a relief to work on a painting in which one can simply smooth two buttocks with your brush' . The second pole for the mentioned cycle are works characterised by a heavy topic - 'Un-dreams" to which apart from 'Mentises' belong such works as 'Poland' ("Polska"), 'Who gave me wings?' ("Kto dał mi skrzydła?"), 'New Millenium' ("Nowe Millenium") and 'Water drop people' ("Ludzie z kropli wody"). Kukowski is a carefull observer of human nature - both external and internal, personal. He is a sensitive artist with a rich imagination and he also uses a perfect workshop. In spite of this, while working on a new painting he searches for new formal solutions. His art is not restricted to realism only. It is the topic in a form of a pretext that determines the painting language.