Iconography referring to the present time and oscillating between hyper- and surrealism – is the shortest definition of Jarosław Kukowski’s painting.

It takes more than a few words to describe his artistic work. In order to do that, I will use the most characteristic (in my opinion) of his works. In Jaroslaw’s works, one the frequent elements is a degenerated, sometimes only modified, bodily form. Skin-like mantises, tank-penises, putta mutants – they all are, in my perception of his work, derision of the cult of the body, which dominated modern world. Naturally, they slightly differ semantically in various contexts, but they could generally be thus described.

In Elements of Betrayal (Elementy Zdrady) these forms are associated with something disgusting. Kukowski could have painted beautiful bodies in a passionate embrace – he is capable of doing that (enough to look at the series of Frescos). The title would have said everything anyway. But the artist did not want to show the surface of the act itself, but the consequences of it and its moral overtones. Thus betrayal does not have to be associated with sexual sphere only (though it obviously is the first connotation), but it gains general meaning (the betrayal of a friend, of one’s country or ideals etc.). The iconographic elements are quite unequivocal in this case – first of all, dry, leafless trees. Similarly, fleshy, slimy creatures with heads resembling penises do not require elucidation. This painting seems to cry at the recipient very harshly: “There is nothing cool about betrayal! It’s a disgusting crap!” 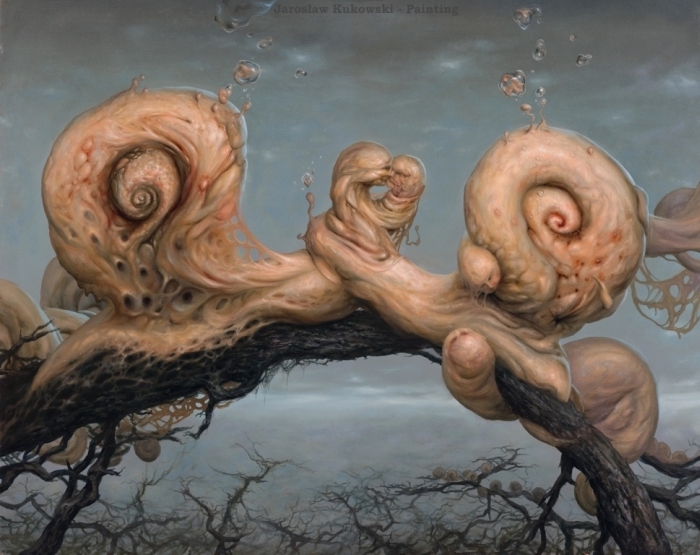 Important, though underappreciated, paintings in the artist’s output (ambitious works are usually underappreciated by the wider circle of recipients) are: Polska and the untitled work presenting masses of little creatures resembling Teletubbies – all of them gazing at a large home cinema screen.

The first work is an excellent insight into our country. Poland is just such an undeveloped Pegasus-centaur, whose miniature wings cannot take high enough to reach an apple symbolizing here the paradise fruit. But the apple does not signify the fruit of the tree of knowledge of good and evil, but simply wellbeing and development - a modern earthly paradise. Where does such a degeneration of Pegasus-centaur come from, such a sad mutation in consequence? A perceptive observer of our socio-political life surely knows well. The rest does not bother to know. It is a very critical look at Poland and a definitely accurate conclusion.

The painting symbolically called Teletubbies shows the kind of havoc television wreaks in our world today. Even more widely, not just television but media in general that are symbolized by home cinema. Figures that appear on the wide screen have anuses instead of mouths. And here, on one hand we observe the directness of the artist, and on the other hand, the creation of certain connotation. Since these figures on the screen represent the modern so called television celebrities. I will not give names, but anyone who does not live in a wilderness and has been in touch with the media for the last ten years, knows who it is about. Kukowski does not only criticize the media however. We can see a few creatures with religious symbols sticking out of their heads on the painting foreground. One of these “Teletubbies” has a conspicuous blooded bandage painted over his head. If we look closer, then we can see that in fact all of the creatures, not only these in the foreground have bandages instead of symbols. Each one of them had had some principles, some system of beliefs, a hierarchy of values, but all of them got rid of it for the sake of crap served by the media, with television in the lead. The painting is a warning: “Media become a false, empty and a destructive idol!”

The cycle of Frescoes mentioned in passing represents not only female acts finely done, but is also a reflection over passing of time, which is shown by skillful (alluding to illusionistic painting) imitation of chips of plaster. It looks like an attempt at joining ancient or at least renaissance wall painting with modern, photographic act.

Jarosław Kukowski’s art is usually defined as controversial. I think this definition is not right. It surely is politically incorrect. Unfortunately, in our times everything that is politically incorrect is called “controversial”, sometimes much harsher words are used, and it is condemned in chorus. If it is politically correct then it is praised as innovative and profound, irrespective of its crudeness and iconoclasm. Jarosław Kukowski alludes to the rich heritage of artists who looked at reality as critically more than once (for example Pieter Bruegel the Elder, Honoré Victoryn Daumier or Francisco José Goya y Lucientes). Moreover, he has respect for technique and form, as opposed to “art” served in galleries of modern art and propagated by media today, “art” that has dropped form and technique for flashiness, nonsense and pseudo-philosophy made up to cover the lack of skill.

Jarosław Kukowski is a young representative of a good old school of painting. The fact that in many ways it is not art for everyone, and definitely not for full time art critics, is actually it’s great merit.